I am a big fan of independent, indie and low budget films, but I have to be honest. I haven’t been overwhelmed lately by most of what I’ve seen. The low budgetness really, really shows, not just in the technical aspects of the film, but often in the lack of professional actors and scripts that lack ambition. At the same time, maybe it’s me, because some of these films that I talk about below, mainly Myth of the American Sleepover, Tiny Furniture and Guy and Madeline on a Park Bench, all have strong support from critics and other movie goers. So, for the record, I’m willing to admit that in these cases, it’s me and not them.

saw the Myth of the American Sleepover at the AFI film fest where other people were talking about it was if it was the next Breakfast Club (or any other John Hughes movie). For me it was a poor man’s American Graffiti. The acting was amateurish, the plotting tedious, the whole thing fairly predictable and formulaic. I suppose one should feel relieved that someone made a film about teenagers in which our reaction is supposed to be that the world isn’t going to hell in a hand basket like Kids, The River’s Edge and even Gregg Araki’s apocalyptic movies. And there is something a bit calming in the normality and everydayness of these characters and their situations. But does something have to be tedious just because it’s not outrageous or edgy? Does normal have to be this uninteresting?

iness Runs, in contrast, is about how our youth were going to hell in a hand basket back during hippie times. The story revolves around a young man coming of age on the hippie commune where he was raised. The screenplay, by director Adam Sherman, wants to blame all the bad things the kids are doing, their sociopathology, on these peace loving, Birkenstock wearing, free love practicing adults (where is Eric Cartman when you need him). The problem with this is that the teenagers here are acting no differently from movie kids who live in the suburbs and blame their hypocritical, money loving, spousal cheating parents on their socipathology or the sons of conservative, Republican, off spring of entitlement parents who blame their mommies and daddies as well. The criticism seems just a tad shallow and way too easy. If every background, no matter the socio economic, religious and political leanings produce sociopaths for kids, then it can’t be due to the socio economic, religious and political leanings of the group. And if the kids are the way they are because of their parents, then you can’t blame the parents, because they are the way they are due to their parents, ad infinitum. The problem in Happiness Runs, though, is that though it feels like an inside look at a hippie commune, the characters still come out a little flat and not particularly vibrant. Not helping are Andie MacDowell, who seems rather bland, and Rutger Hauer, who seems miscast. 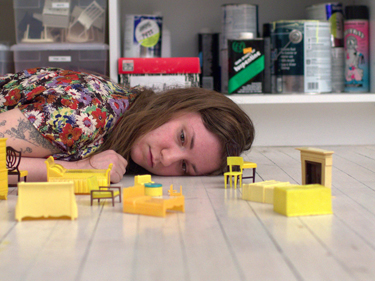 iny Furniture is about a college student who comes home and moves back in with her mother because she doesn’t know what to do with her life. This might have been an interesting story if it had been about the character actually trying to figure her life out. Instead, it’s about an immature, whiny, selfish young adult Aura (played by the writer/director Lena Dunham) who feels she’s entitled and doesn’t have to do anything with her life. Her mother Nadine is one of the most patient person’s in the world. No matter how irresponsible and immature Aura acts, all she has to do is throw a childish tantrum and Nadine lets her off the hook (where are belts and woodsheds when you need them). At one point, Aura wins an argument by asking Nadine whether Nadine’s house is Aura’s home or not; how I so wanted Nadine to tell her that now that Aura has graduated from college, no, it’s not her home, Aura is now a guest and/or a tenant and must act accordingly (it’s one of those loss of innocence times that all kids have to go through). Aura proceeds to arrive home from college and not do one thing to try and pursue her chosen career (something in film, it’s a big vague). She’s supposed to move in with a fellow student when the student moves to New York (she’s even supposed to be looking for an apartment). Instead, she lets two men take advantage of her sexually (one by not taking advantage of her sexually). What’s frustrating here is that it’s so obvious what the men are doing, it’s hard to feel sorry for her. At the end, she seems completely at a loss as to why she was treated the way she was while everyone in the audience saw it coming a mile away. At the end, Nadine tells her daughter that she is extremely talented; it’s hard to know how to feel about this since this talent of Aura’s has never remotely been dramatized; is Nadine’s remark just a comment a mother makes to make her child feel better, or does she really believe it? Who knows? Who cares? However, in the interest of full disclosure, I went with my friend Jim and he found it very interesting. So there.

Guy and Madeleine On a Park Bench is a low budget, indie musical that is magical whenever it’s a musical. The rest of the time, I couldn’t even follow the plot or know why I was supposed to be interested in what was going on. Maybe I saw it at the wrong time and was too tired to follow it. I mean, enough people and critics liked it so someone obviously had no trouble figuring it all out. But for me, I recommend two French movies that do the same sort of thing, but with a more interesting plot and engaging characters: Love Songs and Up Down Sideways. But then, as I said, maybe it’s not them, maybe it’s just me.