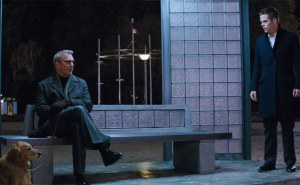 For those who don’t think that there is something incredibly whacked when it comes to the values of Hollywood, submitted for your consideration (cause, yeah, it does seem kind of Twilight Zonish at times):

Jack Ryan: Shadow Recruit is a movie in which Keira Knightley, the marvelous purse-lipped actress of Pride and Prejudice (for which she received an Oscar nomination), Atonement and Never Let Me Go (as well as the mega-franchise pirate movie Pirates of the Caribbean, et al.) is made to play second fiddle as the long suffering girlfriend to…Chris Pine.  Chris Pine.

Jack Ryan: Shadow Recruit is a movie in which Kevin Costner, who, though definitely not a great actor, has given marvelous performances in such films as Bull Durham, Tin Cup and A Perfect World, has been Oscar nominated for his performance in Dances With Wolves, and has become a solid character actor as of late in other such films as The Upside of Anger and Hatfields &amp; McCoys, is made to play second fiddle as an Obi-Wan Kenobi type to…Chris Pine.  Chris Pine.

Jack Ryan: Shadow Recruit is a movie in which Kenneth Branagh, who once had a career trajectory as the new Laurence Olivier after directing and starring in such films as Henry V, Hamlet and Much Ado About Nothing, is made to play second fiddle as a James Bond villain in a non-James Bond movie to, as well as direct…Chris Pine.  Chris Pine.

Jack  Ryan: Shadow Recruit is a movie in which I don’t know how many kazillions of dollars were spent in order to revolve a film and franchise around…Chris Pine.  Chris Pine.

Now, Chris Pine is very attractive, very handsome.  But he’s also a bit bland with not a lot of screen charisma outside his looks.  Stanislavski is definitely not his strong suit.

But for some reason, Hollywood has been insistent on trying to make huge stars out of a series of, well I won’t say “himbos”, because that’s really kind of rude and mean (and probably not fair), but, well, handsome, cut and chiseled, but somewhat mediocre performers who don’t really have the acting chops to fully justify it.

And you know who I mean Chris Hemsworth, brother Liam, Chris Evans, Taylor Kitsch and others (and if you don’t believe me, are you really telling me that you think Hemsworth, Evans and Hiddleston gave better performances or even came close to the ones given by Jeremy Renner, Mark Ruffalo, Robert Downey, Jr. and Scarlett Johansson in The Avengers?)  Which reminds me, whatever happened to Casper Van Diem anyway?

And I guess I am being a bit more than unfair.  Pine certainly doesn’t give a bad performance.  He just doesn’t give all that interesting a one.  He doesn’t hurt the film by any means (and it’s not exactly the kind of film that he, or anyone, could really hurt, exactly).  And I probably wouldn’t have minded so much if he hadn’t been surrounded by a group of thespians who deserve a lot better.

And it’s not even that bad a movie.  It is very entertaining and you do get caught up in it and want to know how it’s all going to turn out.  The screenplay by Adam Cozad (his first) and David Koepp (who started off his career with the marvelous Apartment Zero before he got sidetracked into doing blockbusters) is actually rather clever and a lot of fun at times.  It’s closer to the kind of plot that the Mission: Impossible movies should be using.

And to their credit the screenwriting duo gives us two incredibly exciting action sequences, and I don’t mean the fight in the hotel room that destroys a bidet (no, not the bidet) or the rip roaring finale in New York’s Wall Street.

No, in actuality, the highlights of this movie, the most suspenseful and tense moments, is a claustrophobic scene in a van where everyone is desperately using modern computer technology to figure out where a terrorist attack is going to be, and a discussion of Russian literature between Knightley and Branagh.

Branagh’s direction on the other hand tends to match Pine’s performance more than his own.  It’s a bit bland as well and does little more than get the job done, while his portrayal of Ryan’s antagonist is a much more nuanced and interesting piece of work (I guess it’s good to be the boss).

So in the end, Jack Ryan: Shadow Recruit is a perfectly acceptable piece of entertainment.

But, yeah, I also think it demonstrates that Hollywood’s values are seriously out of whack.