Ever wonder what a reader for a contest or agency thinks of your screenplay?  Maybe this will throw some light on the subject.  I am proud to announce the publication through Amazon of my book Rantings and Ravings of a Screenplay Reader. This is a culmination of many of my blog writings as well as my 2013 movie reviews.

For more information or to purchase the book, please go to http://ow.ly/xK2L0 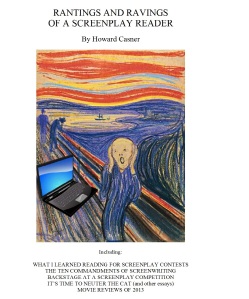 After entering your screenplay in contest after contest, have you often wondered why you constantly come up empty handed? Why your entry never seems to make it past the quarter- or semi- or whatever is the lowest of the finals?

I mean, it’s not like the people who manage the contest are going to tell you.

This book is an attempt to answer that question. To give you, the writer, not just more insight into how screenplays are read and judged, but also some idea as to where your particular screenplay may be falling a bit short.

These essays are based on my ten year experience as a reader and judge for numerous competitions, as well as a provider of one-on-one personal consultation. During that time, I have come to notice that writers often seem to make the same sorts of mistakes over and over and over…and over again.

The essays are not rules to live by. They are not an attempt to codify and tell you what you have to do. I don’t believe in that.

The essays are just a way to give you, the author, more of an idea as to what you may need to do to make it up to that next level.

In addition, included are a series of essays on screenwriting in general, as well as reviews of the movies of 2013, reviews that are written from the particular viewpoint of a screenwriter.