Ever wonder what a reader for a contest or agency thinks of your screenplay?  Check out my new e-book published on Amazon: Rantings and Ravings of a Screenplay Reader, including my series of essays, What I Learned Reading for Contests This Year, and my film reviews of 2013. Only $2.99. http://ow.ly/xN31r 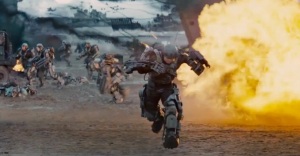 Much has been made of the new summer blockbuster Edge of Tomorrow (or as I usually call it, the new Tom Cruise movie, because, damn, if I can ever remember its real name) having a structure based on the Bill Murray comedy Groundhog Day.

But it’s not, really. I mean, yeah, I guess, sort of, because it does have a similar structure. But no, it’s really not.

Well, since video games are essentially existential in theme (the goal isn’t to survive, because that’s impossible, everybody has to die, the goal is to survive longer than anyone else and leave your initials on the scoreboard for future generations to see) you would finally accept your fate of death and move on to the next game (video games are also Hindu and Buddhist in nature with reincarnation central to their conception—otherwise there’s no way for the creator to make money—are you listening up there?).

There’s even a scene in the movie where the hero, Cage (since he’s trapped, I guess), is training the Joan of Arc figure, Rita (no, she’s not a meter reader), how to make it through the futuristic D-Day—he tells her something like left, left, forward, backward, side, which is just like someone telling you to go left, left, right, up, down, left, right, up, up, up in instructing you how to make your way through a certain level in a game.

Edge of Tomorrow is certainly entertaining, at least once the basic premise kicks in. I would find it hard to believe that you would ever be bored with it. And though it doesn’t rise above its blockbuster background and brethren like, say, X-Men: Days of Future Past or The Lego Movie do, it’s certainly far better than Maleficent, Godzilla and Captain America: The Winter Soldier.

It’s written by Christopher McQuarrie (who has worked on some other Cruise films like Jack Reacher and Valkyrie) and the Butterworths, Jez and John-Henry (who have not), from a novel by Hiroshi Sakurazaka, and you certainly have to admire the cleverness of the plot they’ve come up with and how everything works itself out. It’s a marvelous set of puzzle pieces in many ways.

And it’s directed in a slam bang keep it going on a high level of tension style by Doug Liman, which I guess isn’t surprising since he also manned the helm of such movies as The Bourne Identity and Jumper (though I do sorely miss his early days of directing films like Go and Swingers).

Now, I probably should warn you: I’m going to start being a little mean and ragging on some aspects of the film here. That doesn’t mean I didn’t enjoy it. But you know me, I’m like the scorpion, it’s just in my nature.

For example, the basic set up doesn’t really make a lot of sense. Cage is a public relations wonk who has sold the war to the American public; has made multiple appearances on news programs; and has friends in high places. He is then selected by General Brigham (a curmudgeon Brendan Gleeson who has a constant squint in his eyes and looks like he’s trying to channel Winston Churchill, which seems a logical acting choice to me) to lead a film crew on the military landing the next day on the beaches of France.

Cage being somewhat of a wimp, bows out, but he has no choice. And when he realizes he has no choice, he (no, really, he does this, and he does it in an office crowded with military personnel with no way out) runs (when he did this, all I could think was, “OMG, Tom Cruise thinks he’s in a Tom Cruise movie”).

He is subsequently tasered, and when he wakes up, he finds himself Shanghaied on a military base where he has been given the rank of grunt and everyone has been instructed that he is a deserter. He has no training and so basically has been given a death sentence.

Now, I could accept this scenario if Cage had woken up and found himself a prisoner and forced to accompany the film crew he was originally assigned to.

But for the life of me, I couldn’t understand why someone would want to send someone who is well known in the media and has friends in, as I said, high places (actually, very high places) to his death. That doesn’t achieve anything for anyone and is a scandal in the making for after the war.

So my first thought is that, “Gee, I wonder who Cage pissed off so badly that someone wanted to get rid of him like David wanted to get rid of Bathsheba’s husband”. But not only is this question never answered, it’s never raised. And most unbelievably by Cage himself, who seems far too smart not to figure out something is Denmark rotten.

I guess what I’m trying to say here is that the movie has an awkward, unbelievable opening that doesn’t have a payoff and a structure that basically starts the story in the middle of act one in which it feels like a very important scene got left on the cutting room floor.

Of course, on the plus side, it does help that Cruise is very amusing as he tries to slime his way out of combat (he always did have a incredibly disingenuously devastating smile) and he and Gleeson have a nice chemistry as they trade their somewhat clever bon mots. But still, I just didn’t by it.

Even after this clumsy opening, the movie still struggles to find its stride. Both the writers and director couldn’t quite figure out whether the next set of scenes were supposed to have the tone of No Time for Sergeants or Saving Private Ryan.

The landing itself has all the palpable reality of, well, reality, with soldiers being massacred by the enemy (a group of pretty grotesque CGI’s—these creatures are perhaps the most emotionally devastating part of the film; I mean, dude, they are downright terrifying). It’s pretty gruesome in many ways.

But it all starts with Cage being woken by up by one gung ho of a Master Sergeant Farell (played by Bill Paxton in a mustache I hope is supposed to be ironic because he really looks terrible in it). Cage is then brought to a group of some of the more cartoonish privates one might see outside of an episode of McHale’s Navy or Gomer Pyle, U.S.M.C. None ever come close to being remotely realistic and the style feels out of place next to the more vivid and immediate “D-Day” scenes.

But once Cage is killed and wakes to start the day over, the cleverness of the plot and dialog takes over and things become far more interesting. And at this point, you can fight against it, but I wouldn’t suggest it. There’s no point. You might as well sit back and enjoy the whole thing. I did.

As the movie goes alone, the characterizations don’t really improve that much. The authors attempt to give Cage and Rita (a solid Emily Blunt) more depth. But it’s the sort of attempt that seems a little forced and only calls attention to the fact that they are fairly flat and one-dimensional.

I won’t even comment on the ending. I don’t think it’s remotely logical (as if logic is of a high premium here), but there’s no way I’m going to get into the mind trap of trying to figure it out. I’m just going to let it be what it is.

In fact, I think that’s what I’ll let the whole movie be.