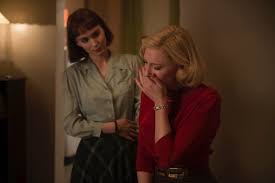 There’s a scene in Carol, the new film about lesbian lovers in 1950’s America, where one of the two leads, Therese, a clerk at a department store, joins her boyfriend and his pal in the projection booth of a movie theater that is screening the classic (though it was new at the time period of the film’s action) Sunset Boulevard.

The pal, who has seen the movie before, is taking copious notes because, as he says, he wants to record the difference between what the characters are saying and what they are really feeling and thinking (for those in the industry, this is often called subtext).

This is a conversation that I found to be of prime pertinence to the film because, with rare occasions, none of the characters ever, ever says what they really feel or think.

But of course, this is 1950’s America, the Eisenhower era where there was a lot bubbling underneath everyone’s skin, but it had yet to burst through to the surface as it soon will when the social revelation comes in the 1960’s.

Carol is based on the novel The Price of Salt by Ripley (not the Alien Ripley, but the sociopathic killer Ripley) writer Patricia Highsmith under the pseudonym Claire Morgan (which, in many ways, may say it all when it comes to hiding things beneath the surface). It’s significant for, among other things, being one of the first, if not the first, gay novel that actually has a happy ending.

Carol is what I would call exquisite. I simply can’t think of a better adjective to describe it. And not just exquisite, but perhaps the epitome of exquisiteness, as well as the height of good taste.

That last phrase would normally spell doom for any enterprise, but Todd Haynes, the director, is perhaps one of the few filmmakers, and maybe the only one, who can raise good taste to the level of art. 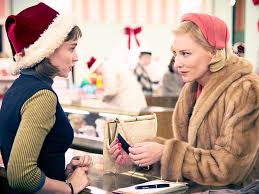 He, along with the writer Phyllis Nagy and a bevy of technical designers (there doesn’t seem to be a false stitch, badly chosen camera angle or misplaced lamp in its two hour running time), has taken the lush, somewhat melodramatic and over the top, soap operic approach of a Douglas Sirk and has brought it down to earth and made it more immediate and personal.

There are many reasons for this. One is that Haynes is no longer restricted by the Production Code and can deal with certain subject matters (like race and gender issues) more openly. Yet in spite of this freedom, and Haynes does use it unrestrictedly, it feels as if he also directs it and Nagy writes it as if they were actually making Carol at the time Sunset Boulevard was released.

It’s an interesting dichotomy, suppression of emotion blown up and revelatory for all the world to see. But it’s this dichotomy that creates conflict, not just in the characters and story, but in the look, tone and feel of the film.

Haynes also seems better at casting than Sirk. Sirk’s movies always looked great, but the virtues of his films often came crashing down under the movie star looks and that’s all they really had performances of such actors as Rock Hudson, Robert Stack, Lana Turner, Sandra Dee and John Gavin (because, let’s face, one doesn’t watch Imitation of Life for Turner and Dee’s performances; the whole movie is easily stolen by the far superior acting abilities of Juanita Moore and Susan Kohner in supporting roles). 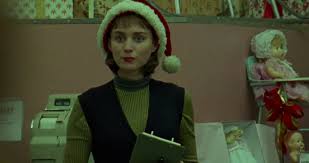 But here we have Cate Blanchett, whose icy beauty hiding volcanic warmth seems in perfect pitch with Haynes’ vision, and Rooney Mara, whose pixyish features (she is first seen wearing a Santa hat as if she’s one of his elves) and wide-eyed innocence is a seamless compliment and counterpoint to her co-star. It’s not just their characters that seem perfect for each other and makes the other complete, it’s the individual acting styles that also form a harmonious whole.

And in true allegiance with the theme and style of the film, though most of Carol takes place during the winter, there is an amazing warmth that permeates the film.

It’s a stunning achievement on Haynes, Nagy and the designers’ part.

One of the finer films of the year.

With Kyle Chandler as Carol’s husband and Sarah Paulson as Carol’s ex-lover and best friend.

The title of the book seems to be a source of conjecture. The best explanation I’ve seen is that salt, at one time, was considered rare and costly. In order for the two lovers to find their way to each other, it will cost them the price of salt. 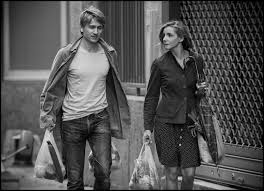 In the Shadow of Women was directed by Philippe Garrel, who has been making films in France since 1964. It was written by committee, including Garrel, as well as the great Jean-Claude Carriere (who is a Gallic legend and responsible for some of France’s finer films, including some by Bunuel like The Discreet Charm of the Bourgeoisie), Caroline Deraus-Garrel and Arlette Langman.

The story is rather simple. Pierre and Manon are aspiring documentary filmmakers living quite poorly in France. One day Pierre meets Elisabeth and they start an affair. But he doesn’t want to give up Manon. When Pierre discovers that Manon is also having an affair, he confronts her and the relationship dissolves. But some time later they meet again and pick up where they left off.

I very much liked the film. But I could tell from the audience reaction that not everyone agreed with me. And I understood perfectly well why they didn’t.

Though I became interested in the characters’ relationship problems and wanted to know what was going to happen to them (not that I cared whether they stayed together or not, I just wanted to know how it all turned out), I can’t disagree with the idea that, well, in many ways, they are all a bunch of ninnies.

Sorry, but I have to say it. You can’t get much more ninnyish that the characters in this film. 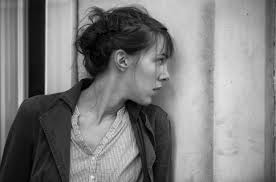 I think the reason for this is that whole thing seems a bit dated. Garrel’s first film was in 1964, which was in the midst of the French new wave, and everything about the movie feels as if it was influenced by that period. And I don’t just mean the black and white, cinema verite cinematography and the Francois Truffaut like narration (by Garrel’s son Louis). The film’s moral attitudes seem so dated as well.

Because Pierre justifies the affair to himself by saying that he was a man and that’s just the way men act. As for Manon, he always assumed that women never cheated, so when she does, it’s something that his masculine ego can’t accept.

That’s about as 1960’s, new wave, black and white cinematography, narrative voice over as you can get. In fact, at one point, I thought maybe it was supposed to be a period piece until one of the characters took out a cell phone and used it.

Yet still, somehow, maybe because of its simplicity, the filmmakers’ sincerity, and the good looking young actors’ complete dedication to playing fools of love, it worked for me.

With Clotilde Courau as Manon, Stanislas Maher as Pierre and Lena Paugam as Elisabeth.

The striking black and white cinematography is by Renato Berta, a French legend in his own right.