ON NETFLIX: Adapted by Daniel Taradesh from James Jones’ novel and directed by Fred Zinneman, From Here to Eternity was one of the new adult movies (even though it was watered down from the book) that Hollywood started making in response to the new freedom in foreign films and an audience that was looking for more grit in their films after going through World War II. It follows various characters around a naval base in Hawaii in the days leading up to Pearl Harbor, especially the story of a private (Montgomery Clift) who refuses join the boxing team and is persecuted for it. And all start cast including Burt Lancaster, Deborah Kerr, Ernest Borgnine, Donna Reed (as a bar hostess because she couldn’t be a prostitute), and Frank Sinatra (in the role that supposedly a horse’s head got for him). It showed all these actors in a new light and won Oscars for Sinatra and Reed. Thirteen Oscar nominations (including five for acting) and the winner of eight.

ON HULU: Betty Blue is Jean-Jacques Beineix’s follow up to his breathtaking film debut Diva, coming after the incredibly disappointing misstep of Moon in the Gutter. A study of two young people in love, often sexually frank. Zorg is a handyman who one day finds Betty, a wild and free spirit. But as their relationship goes on, Betty spirals more and more out of control as her mental state becomes more and more unstable; can Zorg’s love for her save her and their relationship. From a novel by Philippe Djian. 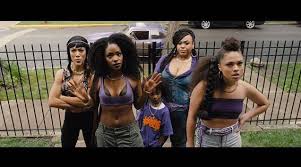 AMERICAN CINEMATEQUE at The Aero: Dirty Rotten Scoundrels, Crime and Misdemeanors, 12/4; Where to Invade Next, Roger and Me, 12/5; Misery, The Silence of the Lambs, 12/10; The Last of the Mohicans, The Age of Innocence, 12/11