ON NETFLIX: Lost Souls: The Doomed Journey of Richard Stanley’s Island of Dr. Moreau is a fascinating, but rather depressing, story about how a promising up and coming director, Richard Stanley (who had a cult following for his low budget horror films) found himself in over his head with his adaptation of H.G. Wells The Island of Dr. Moreau and was so embittered by the experience he almost completely withdrew from filmmaking. Filled with talking heads and behind the scenes footage, we see step by step how things quickly went wrong.

ON HULU: With three directors and four writers, Man Bites Dog is one of the funniest and darkest satires on found footage films (as well as one of the earliest). A film crew follows a serial killer as he adds to his victims. It’s a ridiculous premise, but it still works in all its vicious absurdity. Starring Benoit Poelvoorde as the racist murderer who loves to wax philosophic. 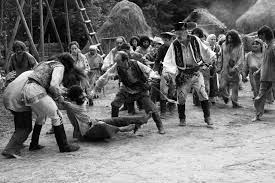 FIRST RUN and OPENING: Aferim!, The Lady in the Van, Son of Saul, The Revenant, The Hateful Eight, Star Wars: the Force Awakens

UCLA ARCHIVES at the Hammer Museum: The Trial of Vivienne Ware, Night Editor 1/22;