For new screenwriters, the niche marketplace is important because it’s not unusual for that to be a stepping stone for up and comers to bigger budgets and more ambitious projects.

For gays and lesbians, it’s doubly important because it gives us a series of films where the central character dying at the end isn’t a requirement for the acceptance of the story (although that can make it more difficult for an actor to get an Oscar nom-#oscarssowhite just loves a nice helping of #oscarsgayssodead).

There have been three movies of late (well, four, but I reviewed The Handmaiden in another post) that are niche films that have a special appeal to the LGBTQ community. Two are what are called coming out films. The other is decidedly not.

One of the most difficult kinds of queer films to make work is the coming out film, mainly because it’s just so 1990’s. It’s a sub-genre in a niche market that’s pretty much been done to death. It’s very difficult to find a unique way to dramatize such a premise and often the most interesting films are what are called post-gay; films that take being gay for granted and proceed from there. But filmmakers persist. As I said, two of the three films fall into this sub-genre.

One approach that can still work is to make the heroes younger and younger, where coming out can still be a frightening step to take (often referred to as coming of gay age films). And here being gay is often shown to be a road to salvation, a way out of the existential angst so many teens find themselves in these days.

Another is to find a community that is non-supportive of gays, often another country where being gay is still anathema to the social order, or even be illegal, or a religious group like The Church of Latter Day Saints. These films, though often entertaining, are also often little more than that since the films tend to feel repetitious of films already made long ago.

And finally the approach can be about a minority within a minority, which is the approach the critically acclaimed film Moonlight takes as it dramatizes the life of a black man in three episodes: when he’s a preteen with a drug addicted mother and a drug dealer who becomes a father figure (and is not homophobic); when he’s in high school and the target of vicious bullies; and as an adult when he is now the neighborhood drug king.

Moonlight is directed by Barry Jenkins, who also wrote the screenplay based on a story by Tarell McCraney. It’s a first feature and is a deeply moving film filled with great empathy. It combines two familiar themes, growing up black in a poor neighborhood and coming out, to great effect.

Though the subject matter is familiar, Moonlight is more than its story. It’s also made by a director with a certain pictorial style. It opens with a camera spinning around, refusing to stand still, flowing by its characters in a dizzy urgency. And it’s told with a strong visual flair driven by scenes of tense, moody silence.

And it doesn’t resolve the character’s life. One of the differences between Moonlight and other coming out stories is there is no salvation dramatized here. Though it’s deeply moving when our hero comes to terms with his true self, he’s still the neighborhood drug lord, quite possibly destined for the same short life of his late father figure.

With Alex Hibbert, Ashton Sanders and Trevante Rhode as the hero at three different times in his life (Little, Chiron and Black respectively) and Andre Holland as the adult version of his closest friend and object of affection. There is one odd moment when the two meet up years later and recognize each other instantly. They bear so little resemblance to their younger selves, this resulted in some unintentional laughter.

Closet Monster, the first feature from writer/director Stephen Dunn, is much closer to a traditional coming out film. It’s about a high school teen struggling with his sexual identity, traumatized as a young boy after watching a vicious hate crime, and then growing up living with an alcoholic, homophobic father with anger management problems (his mother has long fled the nest after she could no longer stand her husband and though she remains in close contact with her son, has started a new family).

The film is more traditional in its approach to its subject matter. It follows all the usual tropes. 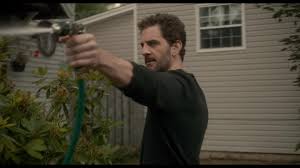 The story, though familiar, is never boring and even toys with the modern idea of sexual fluidity through a Quebecois teen co-worker visiting town for the summer. And it takes the ending of gay being a road to salvation and becoming a more authentic you.

With Connor Jessup as our hero Oscar and Aaron Abrams as his father. 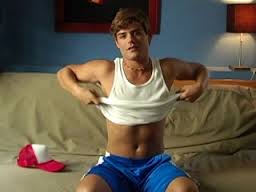 King Cobra, from writer/director Justin Kelly, is the most post-gay film of the three. All the main characters are gay, but none deal with it as an issue. Their coming to terms with their sexual identity took place years before this story begins.

King Cobra is fascinating and fun in a ripped from the headlines sort of way. It’s exploitive and sensational and all the better for it. 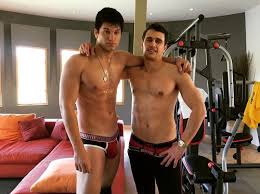 It does some unusual things. The hero Sean Paul Lockhart (aka Brent Corrigan) never does anything wrong really, but is treated somewhat unsympathetically, as cold and manipulative. The two rival producers have a warped relationship and have little qualms with committing murder, but their bond is treated as the only authentic one.

With an interesting roster of actors including  Garrett Clayton as Lockhart/Corrigan; Alicia Silverstone, previously of Clueless, but apparently old enough now to play Clayton’s somewhat Oedipal mother; Christian Slater as the adult film producer; the whatever happened to Molly Ringwald as Slater’s sister; and Keegan Allen and James Franco as the rival producers. It’s another entry in Franco’s is he or isn’t he cast of characters, but he shows more emotion and a wider range than usual.