I can’t really say that The Hunt, the new Danish movie about a man accused of pedophilia that was not that country’s foreign language film entry in the Oscar race (that went to A Royal Affair), is particularly ambitious.  It doesn’t really bring anything new to the genre of films about child molesting except perhaps make you realize how really sad it is that enough movies have been made about the subject that we can actually give it its own genre and that we can actually now say that a film brings nothing new to the topic that myriads of other films haven’t already.
At the same time, it definitely gets the job done and is never boring.  There are also some jarringly effective scenes of violence (a son defending his father; a confrontation at a grocery store; a painful interaction at Christmas Eve mass—we may think that Europe is fully secularized, but the more one sees movies and TV shows from over there, the more one realizes how important religion still is).   And an unnerving, in a way, conclusion that dramatizes how easily one can forget all the atrocities that a group of people have rendered unto you; the ending seems to suggest that time heals everything (well, for almost everybody) and that one can become friends again quite easily with people who have betrayed you as if nothing had ever happened (is that a happy ending or an unhappy one, I’m not quite sure).
But the movie also has one other thing going for it.  The lead is played by Mads Mikkelson, the alliterative leading man who is fast becoming an international star (he was La Chiffre in Casino Royale and also stars in A Royal Affair—you’d think he’d learn to share, by now).  I  don’t know what it is about him.  He’s not traditionally handsome.  His cheekbones are impossibly high and he has a perpetual look of Garboisc sadness with eyes that always seem to be watering in that Katherine Hepburn post Summertime way.  But still, he’s attractive and intriguing.  He’s Humphrey Bogart with lighter hair.   He’s also talented, which never hurts.
In The Hunt he plays Lucas, a kindergarten teacher.  His best friend’s daughter, also one of his students, makes a sexually suggestive comment about him in a fit of pique.  The accusation isn’t true. It’s a little unclear that she fully understands what she said.  But it’s too late.  Even when she tries to take it back, no one will let her.  And Lucas’ life quickly gets sucked into a dark hole.  And Mikkelson makes the most of the role winning the best actor award at Cannes.
The movie was written by Thomas Vinterberg and Tobias Lindholm with Vinterberg also directing. Vinterberg first burst onto the international scene with his explosive Dogma film Festen (The Celebration), a triumph that may turn out to be one of the most important films of the 1990’s due to Vinterberg’s groundbreaking use of digital filmmaking that is today being integrated into almost every area of the industry.    His movies continued exploring the darker side of Danish life.  In 2010, he and Lindholm also collaborated on the movie Submarino (no, it has nothing to do Marvel DC comics), a stark study of two brothers psychologically damaged and estranged over an incident that happened when they were little and who now reunite for their mother’s funeral.  I don’t know what it is about Scandinavian film.  Denmark is supposed to be the happiest country on earth, but you’d never know it from the movies they make.
As effective as The Hunt is, it also feels a bit like Vinterberg is marking time.  As was said, he doesn’t really bring anything new to the subject and thus the movie ends up being more of a first rate vehicle to show off Mikkelson’s talents.   If you want to see a really devastating film about a man falsely accused of molesting children, see Guilty, the true story of a man and his wife arrested for being part of a child slave ring.  Lucas’s ordeal was spring break in Cancun in comparison to the hero of Guilty. But until then, The Hunt will more than do.
0 CommentsLeave a comment

Further Quick Run Downs on Films I Haven’t Reviewed Yet

Carlos is Olivier (Summer Hours) Assayas’s latest film (well, it’s a three part television mini-series, actually, but let’s not quibble). It’s a magnificent achievement that helps put Assayas at the forefront of contemporary French filmmakers. Ilich Ramirez Sanchez (code-name Carlos, aka The Jackal, though his only connection to that assassin was that authorities found a copy of the Frederick Forsyth book among his belongings) was one of the superstar terrorists of the 1970’s, but his life, at least as portrayed here, was in many ways a comedy of errors. His biggest hit, the one that put him number one on the top 40, was the 1975 OPEC meeting he took over, during which he accidentally kills the minister from the country that was eventually to give him asylum (oopsies). Suddenly, like an actor whose latest billion dollar film flopped, no one wanted him anymore and Carlos spent much of the time flying from place to place, being constantly rejected until he had to make a humiliating deal to survive. The whole movie in many ways reads as a treatise on the uselessness and ridiculousness of terrorism. It’s not so much that it’s immoral in itself, as that it is doomed to failure and just never works. Edgar Ramirez plays Carlos and probably gives the performance of the year. It’s also one of the films of the year. 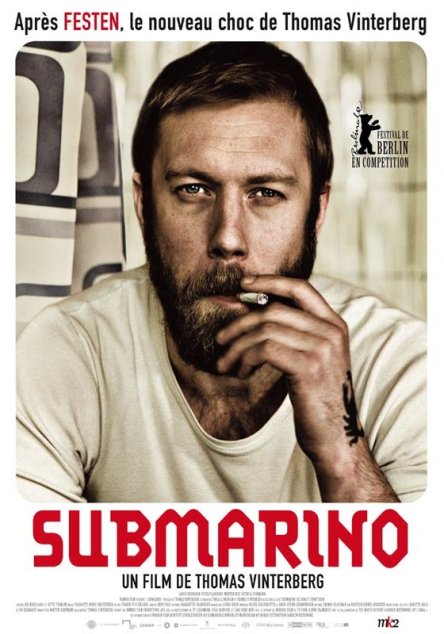 Submarino is the latest film from Denmark’s Thomas Vinterberg, the director of the powerful film Festen. Denmark is supposed to be the happiest country on earth, but you’d never know it by the downbeat films we’re getting from there. Submarino is about two brothers, Nick and Martin, who, as very young boys, were left by their alcoholic mother to take care of their baby brother; the baby dies under their care, a horrifying incident that latches onto their lives and never lets go. Now adults, Nick is an ex-con who can’t stop drinking while getting random blowjobs from a neighbor and trying to help a mentally compromised friend. Martin is a drug addict who has a child. The two brothers, who haven’t seen each other for a long time, meet up again at their mother’s funeral. When the mother’s death brings Martin money, he starts selling. He ends up in prison and now Nick has to decide whether to take care of his nephew. One wants to dislike these two siblings, but the script by Tobias Linholm and Vinterberg, as well as the strong performances by Jakob Cedergren as Nick and Gustav Fischer Kjaerulff as Martin, won’t let us. And no matter how dark life becomes, Vinterberg strongly believes in the power of redemption.

os Hernanos from Argentina is a comic study of a brother and sister. The brother is gay, passive and takes care of their sick mother while the sister is a bully and at times seems to have a precarious hold on reality. When their mother dies, the sister takes over everything including her brother’s life. But while brother starts making inroads toward independence during an amateur production of Oedipus Rex (an odd choice here since it doesn’t seem to have any relation to what is going on off-stage—at least I hope not), sister must accept the idea that she can’t even control her own life, must less anyone else’s. I saw the film at an Argentine film festival and asked a couple I met what they thought of it. They disliked it intensely. They didn’t “get it”, and they have a point. Once the director/writer Daniel Burman and co-writer Diego Dubcovsky decide to not make the sister mentally unstable, which she sure seems to be for most of the movie, they didn’t know how to resolve the situation and the ending is a bit of a mess. But until then, this is a fun, often hilarious character study of a dysfunctional relationship.

The Girl Who Kicked the Hornet’s Nest is the last in the Lisbeth Salander trilogy about the mildly autistic IT genius and central character of a series of popular Swedish mystery novels. In the same way that Denmark is supposed to be the happiest country on earth, yet as of late has been releasing some of the most depressing movies in Europe, Sweden is supposed to be a country incredibly low in crimes like murder, yet seems to release extremely violent mystery novels. My friends hate the movie and the critics were disappointed. I loved it, which caused my friends to look at my oddly (no word on how the critics felt about my opinion, but it probably wouldn’t have been much more positive). I thought the story (director Daniel Alfredson, writer/adaptation by Ulf Ryberg) brought everything together and resolved Salander’s story and character arc very satisfactorily; Salander goes from someone who trusts no one, least of all the government, and comes to realize that there are people out there who care and sometimes the government, in the right hands, can do the right thing. Noomi Rapace, like Edgar Ramirez for Carlos and Vincent Cassell for Mesrine, gives one of the performances of the year and the mystery is first rate. I’m not sure why I’m in such a minority here.

Everyone Else is a study of a Gitti and Chris, a man and woman on holiday whose relationship takes a sudden turn when Chris runs into an acquaintance and he begins to wonder whether he is out of his girlfriend’s league. Gitti, realizing that something is wrong, bangs her head against the wall for awhile and then decides to take her life into her own hands and tells Chris she doesn’t’ love him anymore (take that passive aggressors everywhere). For the first two thirds, the movie (written and directed by Maren Ade) works very well and Birgit Minichmayr gives a strong performance in the lead. The ending however is a serious misstep. Maren Ade, for some odd reason, wants a happy ending and the lengths she puts the characters through to get to it are just a bit too manipulative to be convincing. And who would want Gitti to go back to that louse of a boyfriend anyway?

are Exports: A Christmas Tale is a dark twist on the Santa Clause story. Instead of a holly, jolly fat man who brings toys to boys and girls, he’s a demonic figure who eats children alive. Some time ago, the local villagers in a town on the Finnish/Russian border had enough and encased Santa in ice and then proceeded to rewrite the myth. Now an oil drilling company (headed by English speaking characters of course) accidentally finds Santa, which reawakens Santa’s elves who then work to free him by stealing heaters and melting his ice prison while taking children prisoner so Santa can eat upon his reappearance. The elves say it all, naked old men who run around looking like refugees from NAMBLA, providing some fun tongue in cheek humor to the whole thing. All in all, a fun, quirky little film, imaginatively told.