Two films have opened as of late which have disaster in common. One falls into that genre and one almost is one.

There is one transcendent moment in the most recent version of The Magnificent Seven. It comes at the end as the credits begin by showing each of the characters. At this point, behind them, one can here the incredibly epic score by Elmer Bernstein from the 1960 version. It’s stirring, splendid, glorious, stunning…

Unfortunately, this tiny fraction of the movie only really ended up serving one purpose: it clearly reminded the audience of the earlier version, and not to the benefit of the present one, and only went to show how bland and uninteresting the music is when it comes to James Horner and Simon Franklin’s score for this Western remake of a remake (yes, it apparently took two people to come up with something so dull). END_OF_DOCUMENT_TOKEN_TO_BE_REPLACED 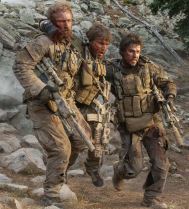 The action/adventure/war movie Lone Survivor, written and directed by Peter Berg (who seems desperate to make Taylor Kitsch, who he has directed before in Friday Night Lights and Battleship—at least we can’t blame him for John Carter of Mars, into a star for some reason), is a film of ironies.

It’s a celebration, even an exaltation, of the abilities of the elite fighting team Navy Seals; yet the mission dramatized here is a failure, and not just a failure, but a spectacular one at that.